This term at Tuntable Preschool one of our projects has taken on a life of its own.

It started as an idea to make a transformer robot dinosaur to replace our ageing scarecrow robot.

“It can be a T-rex that turns into a car”, was Leo’s plan. More ideas were suggested as we explored different ideas. That it can fly , swim under water, turn into a spider and live in a volcano. 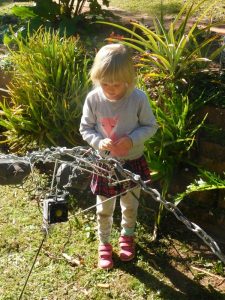 One of the consistent thoughts was that it had to be strong and that the strongest building material for a transformer robot dinosaur was metal. And so began our metal machine sculpture.

As part of the first step we weaved some heavy chain onto a long metal rod and added some legs, Mikayla observed, ”It looks like a skeleton. A dinosaur skeleton!”

Since then we have been slowly working out ways to attach our various switches and cogs and cooling fans. And solving balance and stability  issues.

We have used a hacksaw to cut threaded rod to make stabiliser bars and attached them into chains. We have been using pliers to cut and weave with wire. We’ve used spanners and shifters to tighten and loosen nuts.

Most interestingly it has a key in an ignition switch and the children are discussing what will happen when you turn the key when the sculpture is fully wired up!